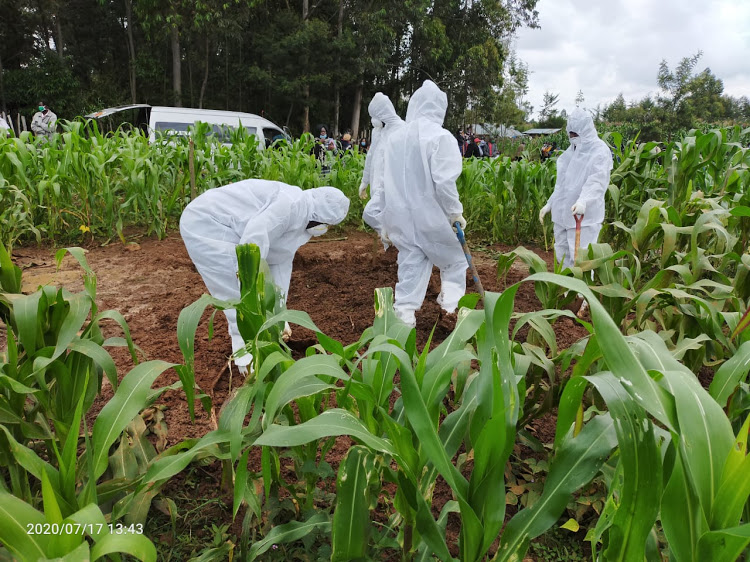 Burial mix-ups occasionally happen but it’s worse when one body is Covid-19 positive.

Both bodies were in similar body bags in the same place in the Vihiga Referral Hospital morgue.

Several rituals had to be performed before public health workers exhumed the body of an unidentified man they mistakenly buried in a place of the cleric whose infected body had been left in the morgue.

Shamakhokho location chief Modlyn Imbayi said the rites were performed at night before the body of the unknown person was reburied in the wee hours of Sunday.

“We do not know the person who was buried and therefore before the exhumation, several customs had to be performed and the whole process is done at night,” Imbayi said. He declined to elaborate on the rituals.

The administrator said people who went to the morgue looking for the other man’s body discovered the body of the clergyman.

The mix-up, labeling, and placement of bodies raise questions about the hospital’s preparedness to handle the bodies of those who die of the virus. The bodies are placed in the same location as those who die from other ailments.

Imbayi said it was rare in Tirikiland for families to bury the ‘wrong’ bodies.

Rev Simwa died of Covid-19 on Wednesday at the Vihiga Referral Hospital. On the same day, an ailing man was admitted but died shortly after his Covid-19 samples were taken. They turned out to be negative.

Both bodies were placed in bags and taken to the mortuary.

“We buried the wrong body today on Saturday,” Imbayi said.

“A family was looking for the body of their deceased [the cleric] at the mortuary and couldn’t find it. Then they started tracing those who had picked bodies there and [mistakenly] had ended up with the one was buried in Kisasi,” he said.

Elizabeth Asena, who identified herself as an in-law of the person who was mistakenly buried in Kisasi instead of in Mbale in Sabatia sub-county, said they had taken him to hospital. She did not identify him.

He died on Wednesday before the results of the Covid-19 test were out. Both bodies were placed in bags and taken to the morgue.

“When the results came, they were negative and we were advised by the hospital to collect the body for burial. When we arrived on Saturday to pay the bill and prepare the body for collection on Sunday, we found the remaining body in the bag was not ours.

“That’s when we started tracing as they were the only two bodies wrapped up,” Asena said.