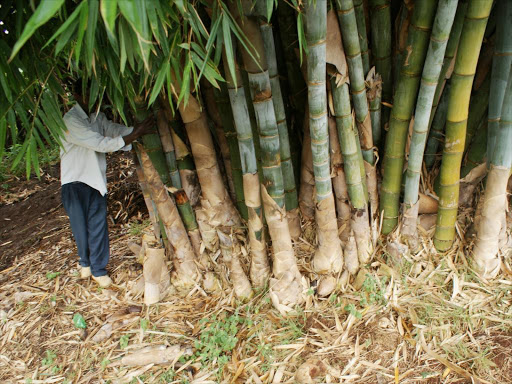 Kenya joined the rest of the world in making the World Bamboo Day on Friday with the assurance that the crop will be given top priority.

The commemoration at the Michuki Memorial Park comes days after the government declared bamboo as a crop required in the economic development of the country.

Environment Cabinet Secretary Keriako Tobiko who lead the country in marking the day said the President is the champion behind Bamboo.

The theme commemoration was under the theme, “Sustaining Kenya the Bamboo Way”.

The declaration was passed during the 8th World Bamboo Congress held in Bangkok in 2009.

Tobiko said the president Uhuru Kenyatta during the cabinet meeting gave the direction that the value chain of the crop will be looked into.

“The restructuring of farming, harvesting, transportation, processing and marketing of bamboo needs to be looked at to make it easier, cheaper and quicker for farmers to realize their benefits,” Tobiko said.

Tobiko said the President had also directed that the National Bamboo Policy needs to be finalized and submitted to the cabinet in 30 days.

He said the policy will create an enabling environment for the scale-up of the crop.

Tobiko said the policy will also address bottlenecks within the bamboo value chain.

Tobiko decried the lack of seeds to scale up bamboo production.

“We need sufficient seeds for us to go large scale,” he said adding that propagation won’t help much.

The CS said the Kenya Forest Research Institute has been given permission to import 4.5 tonnes of seeds.

Tobiko said the president had directed that tree nursery be established at the county, regional and at artisan level to address the demand.

He challenged Kefri and Kenya Forest Service to hasten identification, inspection, registration, and certification of private tree nurseries including the bamboo saying it has delayed.

“It has been in books for too long. This must be completed for us to know who we are dealing with,” he said.

Tobiko said the late Michuki knew the importance of bamboo.

“Bamboo clears the mess in the water. It was planted along the river. Michuki, when he was stressed, would go under the bamboo tree and reflect,” he said adding that bamboo is truly a miracle.

It is for this reason that Michuki reflection center will be set up near the amphitheater.

Kiptoo said he will use his wide network he used to enjoy while at the ministry of Trade to promote the crop.

Malombe said they have already set up a five-year bamboo commercialization center in Kaptagat forest.

The center demonstrates what bamboo can do, he said.

“Kenyans should adopt as a cash crop and an alternative to forests which is depleted and takes time to be rehabilitated,” Konchellah said.

Victor Mwanga, chairman of the Bamboo Association of Kenya said the tree has been recognised as the 16th cash crop in the country.

The declaration is to support the growth of bamboo by farmers and therefore improve its value chain as a marketed commodity.

During the commemoration, an exhibition of over 50 bamboo products was displayed.

According to the Bamboo Association of Kenya, an umbrella body that brings together players in the sector, Kenya has only one indigenous bamboo species, Yushania alpina growing naturally in the country.

Mwanga said that because of the restricted distribution and due to increased exploitation of the naturally growing bamboo, the government through the Kenya Forestry Research Institute introduced exotic bamboo species from Asia and India.

Twenty species were tried out of which 12 are now grown in different eco-zones of the country.

He urged Kenyans to adopt bamboo farming as it can be grown in most of the climatic conditions in the country. The tree grows within three to four years and can be harvested for the next 70 to 100 years.

A bamboo tree seedling sells at between Sh150 to Sh200 and Mwanga said the association has recognized nursery operators who put up seedlings for commercial purposes.