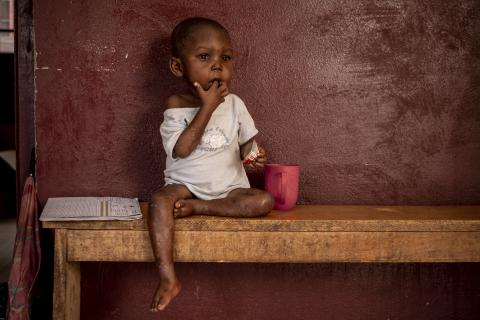 A 38-year-old Tanzanian woman is being held by the police over allegations of killing, cooking and feeding on her son.

Christina Mlewa allegedly slaughtered her disabled son, Joseph Bumbilo, on Wednesday before cooking and eating the boy’s body parts, a Tanzanian local daily reported. The horrific incident happened in Mavanga Village of Njombe province. During police interrogation, the woman reportedly admitted to committing the heinous act and revealed that she dumped some of her son’s body parts into a pit latrine and nearby bushes. True to her shocking revelations, security forces in Njombe found the body parts in a bush where they were allegedly dumped. The region’s police commander Khamis Issa said investigations are ongoing to ascertain the motive behind the bizarre act. However, some reports indicate that Christine is mentally unstable and had previously tried to mete out a similar act on one of her children.

Her husband, Daniel Bumbilo told reporters that Christine attempted to kill one of their children in recent years but the neighbors were quick to rescue the child.A similar incident happened on the night of June 2, 2019, when another woman allegedly sliced her one and a half-year-old baby before cooking it. The incident happened in Tanzania’s Geita province. Similarly, the 36-year-old woman was described as mentally unstable.