Wenger: I am now ready to splash cash 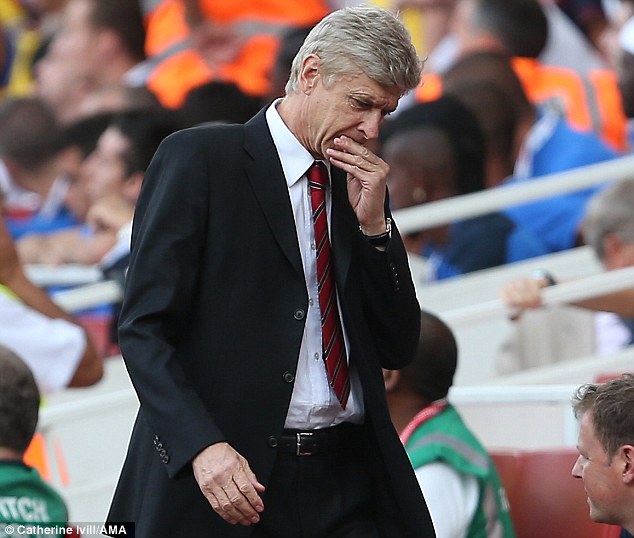 Arsene Wenger has reassured worried Arsenal fans he intends to spend before the transfer deadline.

The signing of Granit Xhaka for £34m remains the club’s only capture this summer despite their attempts to land a striker and centre back.

The lack of action has concerned Gunners fans who have grown frustrated at the club’s lack of spending. But Wenger, who is trying to land Valencia defender Shkodran Mustafi, has moved to assure fans that they will splash the cash.

Wenger said: ‘Before you pay over the odds you have to be convinced by the player. Can he strengthen your squad? Then you must have the money available to pay, because we already invested at a very high price. And we will do so again.

‘We work very hard and I cannot tell you much more. What I fight against is to tell the only way is to buy. It is right when you buy. We are not scared to spend the money. It is about the quality.

‘I think this club has been built on that. The main thing on building the club is based on the transfer policy. I know everyone questions that because we’ve not done as much as they wish. Arsenal are interested in signing Valencia Shkodran Mustafi this window.

‘I’ve done over 400 transfers, and I know every transfer is written. You are not the only person to decide on [them].’

And Wenger has yet again bemoaned the the price of players in today’s transfer market – especially for English clubs due to the amount of money in the Premier League.

He said: ‘There’s two markets. One for English clubs, one for others.

‘That means over a longer period, the advantage for English clubs will drop.’ Leicester’s Riyad Mahrez has signed a new contract with the Premier League champions.

One player who won’t be signing is Algerian Riyad Mahrez after he penned a new four year deal at Leicester. Wenger was known to be interested in the forward but he is one player who Arsenal fans will not see in a red and white shirt.

He added: ‘I don’t want to speak individually about players.

‘He has been outstanding if you look at his numbers. He was top three in terms of goals and assists. He had the best combination in the league.’ Aaron Ramsey will miss the next two weeks with a hamstring injury.

Away from the transfer activity, Wenger confirmed that midfielder Aaron Ramsey will be out until after the international break.

Ramsey picked up a hamstring injury during the second half of Arsenal 4-3 defeat by Liverpool and will be out for the next few matches.

Wenger said: ‘Ramsey is out for two to three weeks. It is not a bad injury. He should be back after the break.’