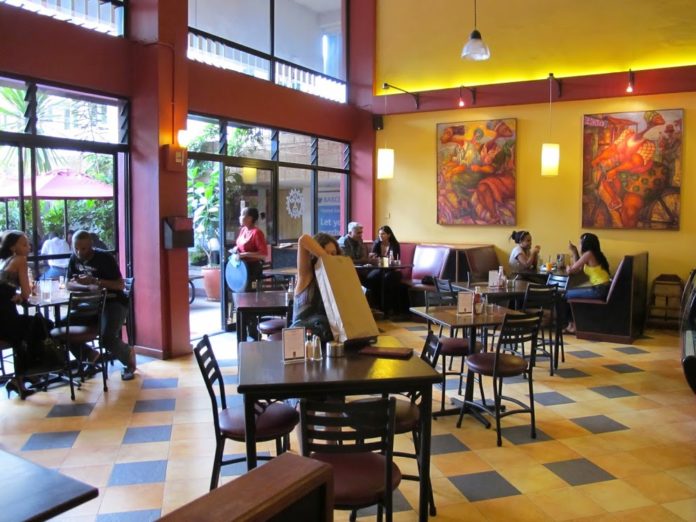 Kenyans were shocked after CCTV footage emerged of a daring robbery that took place on Friday, February 7, at Java House – Lavington, a popular eatery along Nairobi’s James Gichuru Road.

The alleged robbers, a man in a long-sleeved blue shirt and a woman, can be seen making away with a backpack alleged to contain an estimated $1,000 (Ksh100,000), a laptop, car keys and Identification documents including a United States passport.

The duo strikes quickly – the man in a blue shirt pretends to make a phone call before kicking the backpack over to his accomplice who hurriedly shoves the backpack into a larger tote bag before they walked out of the restaurant.

Contacted by, a senior manager at the branch stated that she was not authorized to speak about the alleged incident.

“You’ll have to speak to the main office. I can’t talk about that,” she indicated. The head office was yet to respond to our queries by the time of publication.

The victim offered a cash reward for information leading to the recovery of the lost items.

She further claimed that the robbers seemed to have received prior information as she cautioned Kenyans to remain vigilant.

“It contained my computer, car keys, money, US passport, and other personal items. The man stands up in front of the backpack, and eventually kicks it on the ground over to the woman, who puts it into her large bag and they both leave.

“The man knew exactly which table he was going to when he entered and seems to have been tipped off. Please share with any relevant groups or security teams,” she wrote.

On Facebook, she appealed to Kenyans to help identify the alleged robbers captured in the video.

Anyone with information was urged to report the same to the police or other appropriate security agencies.

Established in Nairobi in 1999 by Mike Ashley, the Java chain of coffee houses was acquired in 2017 by Dubai-based Private Equity (PE) firm the Abraaj Group.