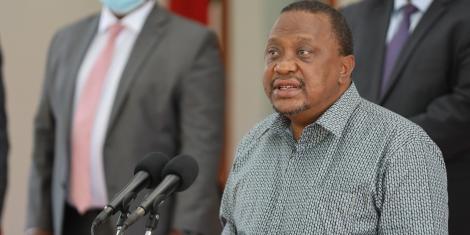 President Uhuru Kenyatta has called a national and county governments’ summit on Covid-19, following a surge in the cases in Kenya.

The Fifth Extraordinary Session of the National and County Governments Coording Summit will take place on July 24.

A press release from State House on Monday noted that cases of the virus have so far been reported in 44 out of Kenya’s 47 counties.

The session will review virus containment measures and the impact of the phased easing of restrictions earlier put in place.

Among the restrictions were a cessation of movement order for hotspot counties and the closure of restaurants as well as churches.

So far, President Kenyatta has lifted the ban on intercounty movement and allowed the reopening of restaurants and churches but with the requirement to strictly observe guidelines for curbing the virus.

The summit will also assess county preparedness and evaluate the overall national response and capacity to handle the pandemic.

It will also discuss the evolution of Covid-19 and medical models on how it may spread locally in August and September, which are expected to be the peak infection periods.

On July 18, Health Cabinet Secretary Mutahi Kagwe announced a record 688 infections in a single day, the highest ever reported in the country.

State House Spokesperson Kanze Dena said, “The President calls on all Kenyans to continue applying the simple yet most effective individual and collective measures that are the best weapons against Covid-19.”

The primary measures are wearing face masks in public, applying correct face and hand hygiene at all times, maintaining social distancing and adhering to all guidelines given by the Health ministry.

The President and Health ministry officials led by Cabinet Secretary Mutahi Kagwe have been reiterating the call for the public to observe basic measures for preventing infection but some, including political leaders, have carried on with meetings.

In areas such as slums, residents say they would like to follow the guidelines but challenges including limited spaces that do not allow social distancing due to the sharing of basic amenities, and the lack of money to buy masks and other protective items.