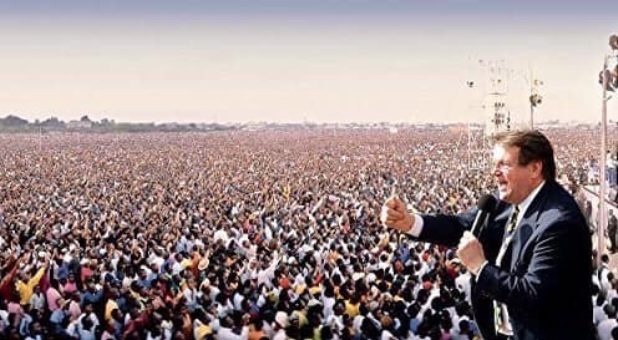 With comparisons ranging from British “Prince of Preachers,” Charles Spurgeon to American televangelist Billy Graham, Reinhard Bonnke’s status as the father of modern-day crusade preaching and healing in Africa is indisputable.

At the end of some of his sermons, he would ask who in the crowds was hearing God’s call to take the microphone from his hands.

His message of redemptive hope became important, particularly in African nations affected by drought, civil strife, and other tragedies. 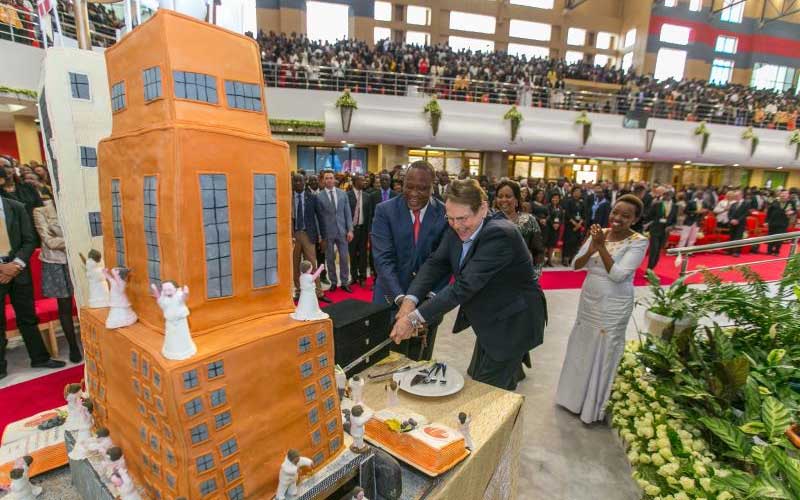 “His pioneering, militant approach of open-air crusades was informed by our context. Like the Biblical St Paul, he was aware that he was confronting strong evil forces,” says Mr. Mamboleo.

His Christ For All Nations (CFAN) organization, known for its work throughout Africa, claims Bonnke oversaw more than 79 million conversions to Christianity.

At huge rallies – including one in Nigeria’s main city, Lagos, in 2000 that was said to have drawn 1.6 million people – Bonnke claimed to heal people using the powers of God.

He also told followers he had witnessed people rising from the dead, although such “miracles” were dismissed by his critics.

Stephen Mutua, who between 1986 and 2009 served as an international director under him, remembers riots in mainly Muslim Kano in northern Nigeria in 1990.

The Muslim population had been angered that Bonnke had secured permission to hold a crusade.

“In the ensuing chaos, I found myself in an armored car for the first time in my life, before the Nigerian military airlifted us to Lagos,” Dr. Mutua recalls.

“Bonnke, who understood Nigeria’s religious dynamics, condoled with the nation in a personal message to the federal government and vowed to return.”

“After the incident we had our visa applications denied and we didn’t return to Nigeria for 10 years.”

He notes that Nigeria, the most populous state in Africa, would thereafter regularly welcome Bonnke, more than any other African nation.

Nigerian President Muhammadu Buhari, a Muslim northerner, paid tribute to the evangelist, saying his death was a “great loss to Nigeria, Africa and [the] entire world.”

Dr. Mutua avers that while Bonnke may have inspired other teachers, pastors, apostles and prophets in Africa and beyond, the evangelist’s work remains unfinished.

And while the Associated Press news agency reported in 2014 that Bonnke was living in a $3m (£2.3m) apartment near Palm Beach, Florida, Dr. Mutua argues the evangelist was committed to transparency.

“We need to continue in his commitment to scripture and a life of personal integrity for lasting impact,” he says.

‘Healing ministry was a circus’

Dr. Mutua’s rosy view of Bonnke is shared by Dr. Emily Onyango, a lecturer in Kenya’s St Paul’s University’s Department of Theology and Development Studies, who believes Bonnke’s focus on evangelism has inspired millions of Christians in Africa to have a personal relationship with Christ.

“Although he addressed crusades which had thousands of people, his approach had an individual touch and most people felt that he was personally addressing their needs,” she says.

However, Prof Esther Mombo from the university’s Center for Christian-Muslim Relations in Eastleigh (CCMRE), says Bonnke’s impact on Africa is complex and may take researchers some time to properly evaluate.

Established in 2010, the CCMRE has been at the heart of several attempts to build inter-religious relationships between Muslims and Christians in the African context.

Prof Mombo argues that Bonnke’s preaching did not always foster peaceful co-existence, but rather rivalry and hatred.

“The people who suffered through such utterances were ordinary people. There are also those who were exploited,” she says.

“His healing ministries appeared strange, and to an extent a circus. Yet I am sure that through his ministry, some people met Christ and grew in faith.”

Bonnke held a farewell gospel campaign in 2017 in Nigeria, after which he stepped down as the organization’s leader because of poor health.

His influence, however, can still be felt in many streets in Africa where self-styled preachers, microphone tightly gripped in one hand, brandishing a Bible in the other, urge passers-by to embrace the Christian message.