Home General Raila Will Be Back In The Ballot Paper Come 2022 As... 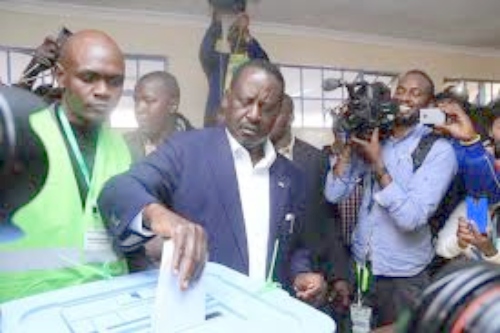 ODM leader Raila Odinga could use the nickname “Baba” or “Tinga” in the 2022 presidential ballot papers if he will vie for the top job.

Equally, Mombasa Governor Hassan Joho could also use the moniker “Sultan” if he so decides. Joho has announced his interest in the presidency.

This will be possible after senators approve a Bill allowing politicians to use nicknames on ballot papers during elections.

Committee chairman Okong’o Mongare will move the amendments in the Bill which he will introduce in the House for third reading.

In the Bill, Maina pushes for the inclusion of a candidate’s popular name on the ballot for the purposes of party primary or election.

“A candidate shall apply to the Commission, in the prescribed form, for the inclusion of the candidate’s popular name in terms of the subsection,” the Bill reads in part.

The proposed law states that a candidate planning to use or include popular names shall apply to the Independent Electoral and Boundaries Commission 21 days before the date of submission of official names.

In the case of an independent candidate, such an application shall be made at the time of submission of the candidate’s symbol.

The IEBC’s approval, according to the sponsor, shall ensure that this flexibility does not prejudice a free and fair election in any way.

Currently, the law only permits the use of a candidate’s official name as it appears in the register of voters and in the candidate’s identification documents.

Maina reckons that the current law limiting candidates to use only their official names disadvantages many people as they have to go through the lengthy process of officially changing their names under procedures set out in the Registration of Persons Act, Cap 107, Registration of Documents Act, Cap. 285 and rules and regulations made under the two Acts.

“The ultimate goal of an election is to ensure that the electorate chooses their preferred leaders in a free and fair environment.

“Name recognition thus becomes an important aspect of a free and fair election and should be enabled to the fullest extent. It ensures that a voter easily identifies his or her preferred candidate on a ballot and, therefore, votes in the way he or she intended,” the senator says.

His argument is that candidates should not be unduly restricted in the way they present themselves to the electorate on the ballot and other election related material as this hinders the realization of the candidates’ wishes to contest in an election.

In the past, politicians were forced to swear affidavits to include their popular names in the official identification documents to allow their use on the ballot paper.

Nairobi Governor Mike Mbuvi and former Kiambu Governor Ferdinand Waititu were forced to include the nicknames in their ID.

Mbuvi included the popular ‘Sonko’ and Waititu ‘Babayao’ to their official names for their supporters to identify them on ballot papers.