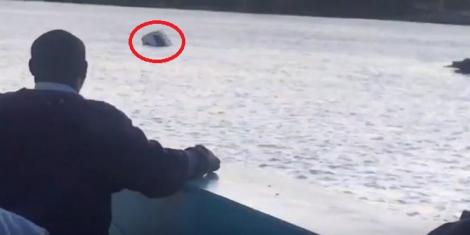 Police have identified two occupants of the car that fell off the ferry Likoni into the Indian Ocean on Sunday.

According to the police, the driver of the vehicle has bee identified as Mariam Kigenda who was in the company of her four year-old daughter Amanda Mutheu.

The vehicle that is said to have been the last one to board the MV Harambee ferry is reported to have reversed midstream into the ocean.

Kenya Ferry services on Sunday issued a statement after the tragedy expressing their regret on the unfortunate incident.

“Good evening, Its with sadness that we confirm an accident occurred on board MV.Harambee which was plying from mainland to the island side at 1815hrs, when a saloon car alleged with two occupants reversed and plunged into the sea midstream. The cause of the accident is still under investigations as search and rescue efforts are under way. Neither the car nor the occupants have been retrieved. We share our sincere sympathies to the affected as the salvage operations continue,” read the statement.

Rescue operations were, however, suspended on Sunday due to lack of proper equipment, before commencing on Monday with the help of the Kenya Navy.

How Do You Catch Coronavirus???

How Masks Are Helping In The War To Control Coronavirus Infections