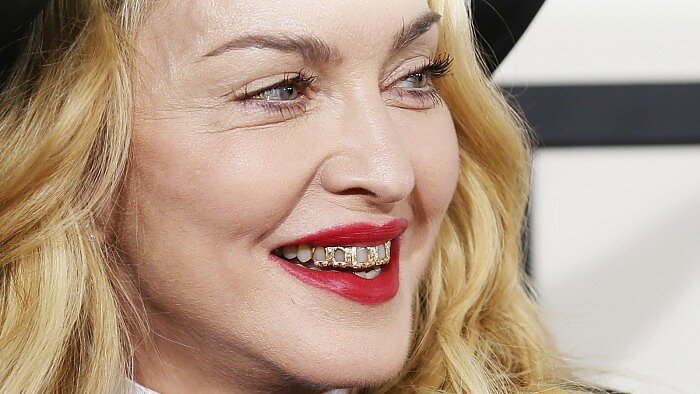 Madonna was left in tears after reportedly suffering a fall during her live Paris show.

The popstar, 61, was performing for her Madame X show at Le Grand Rex on Thursday night when the incident was said to have happened.

It was believed Madonna was held up by a backing dancer after falling off her chair.

After sustaining a knee injury last year, the Vogue songstress does six hours of rehabilitation each day and she has been battling through her tour’s live shows despite the painful injuries.

The star has already had to cancel numerous shows on the tour due to her crippling pain.

Madonna, who has been relying heavily on her cane and knee supports to walk, carried on the two-and-a-half-hour show after she broke down in tears on stage, according to The Sun.

A devastated fan took to Twitter to alert Madonna fans on the horrific incident.

They penned: “A friend who attended @Madonna Thursdays show told me that at the end of Vogue, she missed the chair and fell on the floor.

“A dancer had to help her on to the chair and then during the Polaroid part she broke into tears and couldn’t stop. #madonna #madamex #MadameXTour”.

She started the tour back in September in New York City.

Madonna still has eight more shows to perform at in the French capital before she wraps up the tour on March 11.

Since the start, she has been forced to cancel 14 shows due to her “indescribable pain”.

Previously speaking of her excruciating pain, Madonna said: “I consider myself a warrior. I never quit, I never give in, I never give up! However, this time I have to listen to my body and accept my pain is a warning.”

She admitted it’s a “miracle” to have got this far, and is determined to not give up.

“It’s a miracle I have gotten this far, but a lot has to do with the fact that I do six hours of rehab every day – three hours before show and three after with multiple therapies.

“I have also switched to flat shoes and modified difficult parts of the show. This has helped enormously but I still need to be careful and of course, rest is the best medicine.”

She’s set to return to the stage on Saturday night as she aims to finish the leg of her tour.