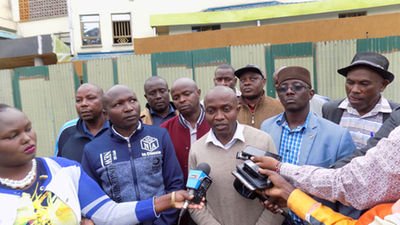 Another bruising legal battle between the Kirinyaga Governor Anne Waiguru and ward representatives is in the offing.

The Members of County Assembly (MCAs) have threatened to move to the High Court to challenge the Senate’s decision which cleared the governor of abuse of office and gross violation of the Constitution.

Through their lawyer, Ndegwa Njiru, the 23 MCAs who voted to impeach Ms. Waiguru in a motion moved by Mutira Ward Representative, Kinyua Wangui said they were not satisfied with the verdict of the Senate.

The ward representatives dismissed a report by the Special Senate Committee that the impeachment process did not meet the required threshold to kick the governor out of office.

They dismissed the report by the Senate which saved the governor from being sent packing and vowed to seek legal redress at the High Court.

“My clients were unhappy with what the Senate did and they must go to court to seek justice,” Mr. Njiru said on Sunday.

The lawyer said the MCAs and even Kenyans were shocked by the ruling of the Senate.

“We gave overwhelming evidence to prove that the governor was not fit to be in office but the Senate ignored it and cleared her. The Senate has dragged us behind in the battle to ensure there is a democracy,” added Mr. Njiru.

The MCAs stressed that their battle with the governor, whom they accused of undermining the authority of the Kirinyaga County Assembly, was far from over.

This comes a day after Ms. Waiguru forgave ward representatives who impeached her, saying her clearance by the Senate marks a remarkable and historic victory for her political life.

“But have I forgiven the forces behind my impeachment,” she said on Saturday.

She called upon the Kirinyaga MCAs to play their part in ensuring the devolved unit moves forward in terms of development.

“Rather than prioritizing funds to projects such as building offices for MCAs, the ward representatives should prioritize allocations of funds for Covid-19 pandemic management and healthcare as proposed by the executive,” she said.

“We have much to do and little time to achieve it. My government remains ready and willing to do work with like-minded individuals committed to the service of the residents,” she added.

She noted that her impeachment process did not meet the required threshold and that is why it was rejected by the Senate.

However she observed that the Senate report’s findings revealed areas of improvement in administration by officers and need for better checks and balances.

She assured the residents that this will be addressed and necessary changes and improvements will be made to human resources and systems to improve service delivery to the people of Kirinyaga.

But Ms Waiguru told the residents that the politically instigated impeachment process has not affected her commitment to serve them.

“I’m more resolved to ensure the residents get the service they deserve. It is unfortunate, the political innuendos have robbed the residents of their right to receive service from their leaders but I assure them that I will do my best to ensure that Kirinyaga Rising vision is achieved,” she said in a statement.

She attributed her woes to her support for the Building Bridges Initiative and the handshake between Orange Democratic Movement leader Raila Odinga and President Uhuru Kenyatta.

She vowed neither to give up nor change her commitment to improve the lives of children and women in the entire country.

“We must continue our quest for a better Kenya whatever the price that will be,” she said.

She particularly thanked her husband Kamotho Waiganjo who had been supportive to her throughout her trial.

“Although the MCAS was not supported by the Senate, they did well in fighting to protect the resources meant to benefit the residents,” she said.

She appealed to the ward reps not to lose hope after their evidence against the governor was thrown out.

“The MCAs have made us know what is happening in the devolved government. They should continue playing their oversight role without fear so that the resources of the region may be safe,” she added.

She assured the MCAs that they have the support of Kenyans and they should continue fighting for the rights of the residents who elected them.