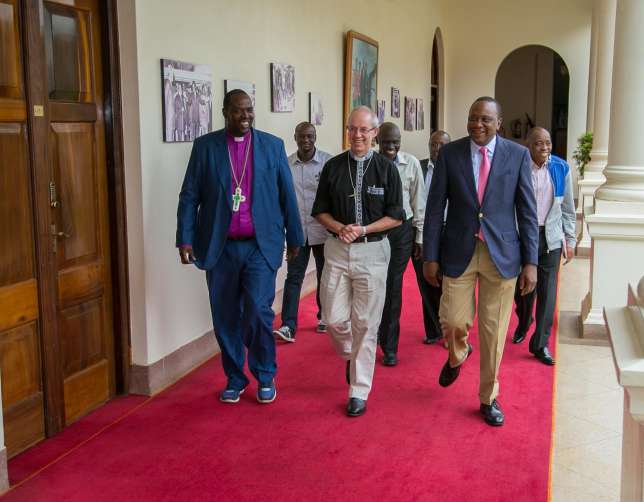 A photo moment at State House Nairobi has elicited reactions online after Kenyans tore into the head of the Anglican Church in Kenya Jackson Ole Sapit, President Uhuru Kenyatta and the Archbishop of Canterbury Justin Welby for their sense of fashion.

First on the firing line was Archbishop Ole Sapit who was blasted for wearing sport shoes with a suit during his courtesy call to State House with the visiting Archbishop Welby.

While his sartorial front seemed to be on point for an Anglican bishop on a first glance, the blue sports shoes oddly stood out in a picture that is likely to be hanged on a wall somewhere.

They accused him of fashion mishap by not dressing for the occasion on an official visit to State House.

Well, Ole Sapit might have taken a piece from controversial Embakasi West MP George Theuri who also attended a meeting of Jubilee leaders at State House in while wearing blue jeans and flip sleepers.

Ole Sapit was not alone in the scrutiny from the photo, President Uhuru also got a mouthful for wearing every color possible.

As head of state, many did not cut him slack for not being fashion conscious, especially when receiving such guests.

Finally, it was the turn of Archbishop Welby who was also blasted for oddly tucking in his shirt and rolling up his sleeve while the others breathed heavily in a suit.

Many were, however, forgiving to the three stating it was their choice to dress the way they wanted and Kenyans should a life.