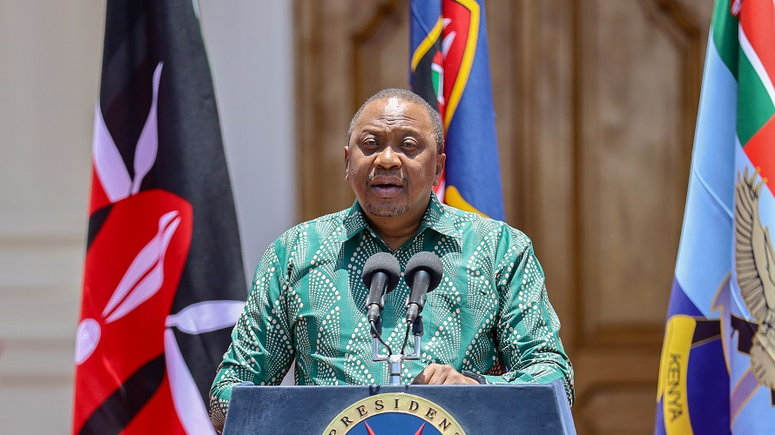 President Uhuru Kenyatta delivered his sixth presidential address on Covid-19 measures at a press briefing at his Harambee House on Monday, July 6.

He looked back at his last address on June 6, and the questions he faced then on whether or not to re-open the country, noting that they chose to prioritize strengthening the country’s capacity to handle the pandemic.

He cited meetings with the Council of Governors, education stakeholders, and religious leaders among others.

“The question before us is have we as a country met the irreducible minimum? Are we ready to open?” Uhuru posed.

He announced an end to the cessation of movement in Nairobi, Mombasa and Garissa Counties.

Uhuru further stated that the curfew from 9 p.m to 4 a.m would be extended by 30 days.

In addition, the President announced that places of worship including churches, mosques, and shrines would be re-opened.

He, however, asserted that the re-opening of places of worship would be done in compliance with strict guidelines developed by the Inter-Faith Council.

“Only 100 individuals are to be allowed in places of worship and not for not more than 1 hour,” he noted.

The President further announced that the Education Ministry would spearhead the development of a plan to inform the resumption of the school calendar in 2020.

Despite sustained pleas from bar owners, Uhuru announced that the closure of bars would remain in place for the next 30 days.

He also directed that the ban on political and social gatherings be extended by 30 more days.

Uhuru appealed to Kenyans to strictly adhere to the regulations announced by the government, maintaining that the government would not hesitate to reinstate the lockdown if the situation worsened.

He asked citizens, particularly the youth, to play a key role in reviving the country’s economy and by re-imagining business models and ideas.

The President also observed a worrying increase in cases of Gender-Based Violence (GBV) during the Covid-19 period.

He directed the National Crime Research Centre to probe the worrying escalation of gender-based violence and violation of human rights.

The Centre was also directed to probe cases of dis-empowering of the girl child, and to provide an advisory of remedial action in 30 days.