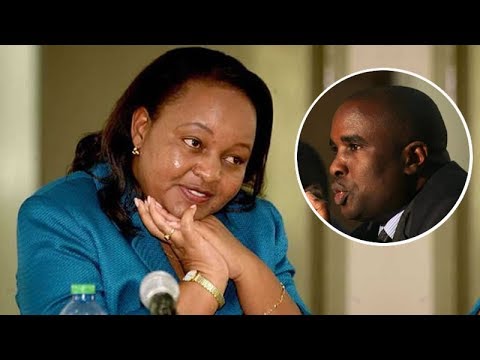 Kirinyaga Governor Anne Waiguru will exchanged wedding vows with Kamotho Waiganjo on saturday, the man who effortlessly waxed lyrics, sweeping her off her feet and convincing her to spend the rest of her life with him.

It all began 10 years ago when the two met at a ferry in Likoni and shared a meal of bread and soda.

Although they had met previously and were obviously familiar with each other, Waiganjo would later reveal that the meeting at the ferry marked the beginning of his pursuit for Waiguru whose love life remained a closely-guraded secret despite her high-flying career.

File image of Kirinyaga Governor Anne Waiguru. She got engaged to Kamotho Waiganjo on 16 Feb 2019

This act of humility (feasting on bread and a bottle of soda), according to Waiganjo melted his heart, making him realize that “she was a basic girl,” despite her career and achievements.

Love-struck Waiganjo would then strike up a conversation with her, collecting her contacts to maintain communication.

With a clear plan and with the prize in his mind, Waiganjo did not relent in his pursuit, and according to his own admission, it was not a walk in the park winning her heart.

He made several phone conversations without giving up, patiently waiting and pursuing Waiguru before she eventually agreed to a date.

Keen not to disappoint on the first date, Waiganjo took the woman of his dreams to a Thai restaurant in Nairobi on their first date.

The couple would end up having their first fight on the same day with Waiguru on the phone for the better part of the date.

“She was on phone the whole time. I had to ask her why she was not paying attention to our date,” says Kamotho.

The couple would also lay ground rules that would see things get smoother in their relationship.

Fast-forward ton 16th February 2019, the City lawyer formalized their relationship and paid dowry in accordance to Kikuyu customs at the Lord Eroll Hotel in Nairobi with close friends and relatives witnessing.

Confirming the significant step in their relationship, Waiganjo stated that “It was a beautiful ceremony. The time was right for us to take our relationship to the next level”.

Speaking to The Standard, Waiguru confirmed that the event caught her by surprise.

“I was completely surprised. We had not been talking about formalising our relationship so I did not expect it. We had just come from holidays and were celebrating his birthday as we do with close friends every year.”