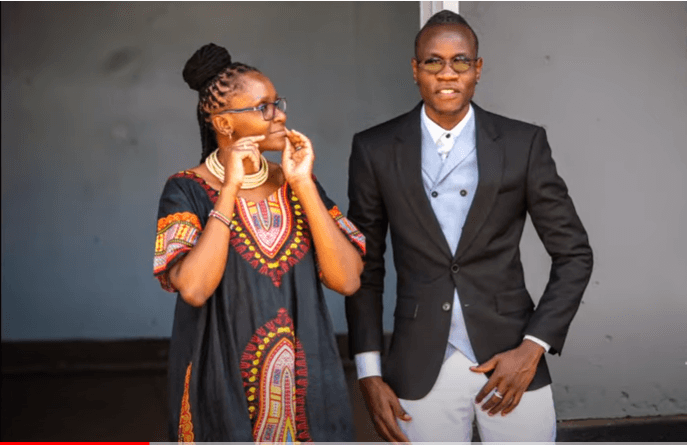 Guardian Angel has revealed that he met his current girlfriend Esther Musila through a mutual friend, radio presenter Maina Kageni in March this year.

Esther celebrated her 50th birthday at a Children’s home together with Guardian Angel. Speaking at the event, he said,

I MET ESTHER TWO MONTHS AGO THROUGH A FRIEND OF OURS WHO IS A FAN OF MY MUSIC, MAINA KAGENI. ESTHER GOT MY SONG THROUGH HIM AND WE GOT TO MEET AND INTERACT AND TALK ABOUT MY MUSIC. WE BECAME VERY GOOD FRIENDS AND WE THANK GOD THAT TWO MONTHS DOWN THE LINE SHE HAS BEEN ABLE TO COME THROUGH FOR MY MINISTRY. BIRTHDAY GIRL, I WANT YOU TO KNOW THAT I LOVE YOU.

The mother of three who recently released a song featuring Guardian is smitten with his love and they’ve been posting photos of each other on their social media accounts.

Maina Kageni confirmed the two were dating and while commenting on one of his pics, he wrote,

In a previous post, he wrote,
TWO THINGS YOU WILL NEVER HAVE TO CHASE: TRUE FRIENDS & TRUE LOVE.” “TRUE FRIENDS ARE THOSE WHO CAME INTO YOUR LIFE, SAW THE MOST NEGATIVE PART OF YOU, BUT ARE NOT READY TO LEAVE YOU, NO MATTER HOW CONTAGIOUS YOU ARE TO THEM. #LOVEWINS.