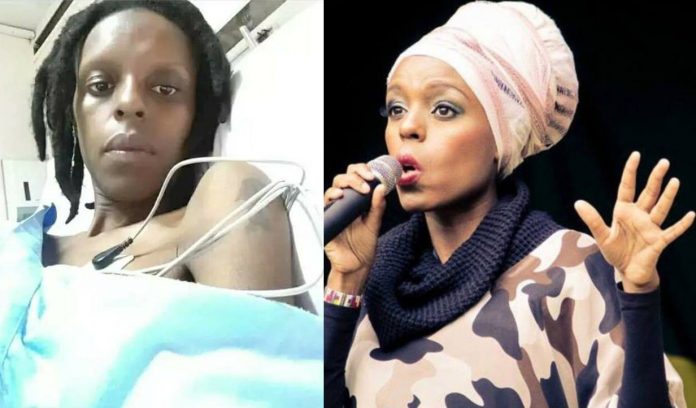 Njambi Koikai who is known from her reggae shows and The Trend talk show needs the money for specialized treatment in the United States.

She suffers from thoracic endometriosis. According to Njambi, the condition has ravaged her lungs and they can’t operate on the lungs anymore without removing part of it.

“I’ve undergone more than 10 surgeries and this is happening every month. I am kindly asking for your help. Paybill number is 490681. Account name: Jahmby Koikai Fund,” she says.

Below is her heartbreaking story as told to Daily Nation’s Angela Oketch.

“This story starts with my periods. I started menstruating at the age of 13, and from the first time I bled, I have always had extremely painful periods. Every month is hell for me, and that means I plan my life around my periods.

My mum and grandmother assured me that the pain would lessen or go away once I got a child, but when you are 13, or 14, or 15, or 18, getting a baby sounds like a faraway, promised land. If I had known then that the excruciating pain I experienced was not normal and sought treatment earlier, I probably would not be in this pain today.

I started my gynaecological visits when I was 15 and had to be put on birth control at that tender age to balance my hormones, yet that still didn’t stop the pain. I had to learn how to manage the agony over the years as it became more and more unbearable.

In high school, the pain was excruciating. I would not attend classes for a whole week every month.

The teachers didn’t understand what was wrong with me as I didn’t see the need to explain it to them. I was shy about it.

After high school in 2002 I thought I could easily manage the condition outside the strictures of an academic institution, but when I joined university, and with my reproductive health organs now mature, the monthly pain seemed to get worse. I missed so many classes and had to repeat most of my courses at Daystar and USIU due to absenteeism.

I tried strong painkillers and even herbal remedies and a complete change of diet, but the pain persisted. After great difficulty, I graduated from college and started looking for a job.

One day two years ago I was working at QFM, a Kiswahili radio station owned by the Nation Media Group, when I felt a sharp pain in my chest. It would start from my ribs and crawl up all the way to my shoulder.

At times I would experience shortness of breath. I thought it was the air conditioning in the studio, but an X-ray would later show that my right lung had collapsed.

My chest specialist treated the lung, and within days I was back at work. I didn’t know what had caused the lung to fail and my doctor didn’t look into my medical history to harvest any clues.

And so, a few weeks later, I felt the same pain again. This time it was complicated by my existing condition, which caused pain in the pelvic area, heavy bleeding, cramps, backache, irritable bowel, loss of appetite, fever, diarrhoea, and nausea every month.

Further medical examinations revealed that I was suffering from pneumothorax, which is a rather complicated way of saying I had a collapsed lung. The doctor explained that I wasn’t eating enough, and that the condition was prevalent among skinny people. I weighed 45 kilogrammes at the time.

Medical research is still conflicted on this weight issue. Researchers in Australia say that childhood obesity might lead to early signs of endometriosis, but their colleagues in the US suggest that heavy women are less likely to be diagnosed with endometriosis than their slimmer peers.

In the Australian study, researchers warn that an overweight 10-year-old has double the risk of developing endometriosis later in her life.

The study, which compared over 500 women with and without endometriosis, investigated early menstrual characteristics before the onset of the disease.

They also found that starting your period at a later age — over 14 — gives you a decreased risk of the disease.

However, other studies suggest the opposite, claiming that, generally, women with endometriosis have lower body mass indexes (BMIs) than women without the disease. I fall in this category.

I couldn’t believe it. I mean, all this pain, all this discomfort, all these visits to hospital… were because I was not eating well? You mean I was doing this to myself? Ruining my life? I was angry with myself, and I promised to remedy the situation. I would eat whatever came my way, to save my life.

After a few weeks of gorging myself, the pain resurfaced. Food was not helping, and so I went under the knife to correct the sickly lung.

Things happen in a very funny way. I was down with a collapsed lung and my grandma, who had kept watch over me after my mum passed away in March last year, was battling stage four pancreatic cancer.

Desperate for help, I held a TV fundraising for her during which I also mentioned that there was something going on inside my lung. Immediately, a viewer got in touch with me and shared her experience.

She had had 10 lung collapses, she explained, and what was bothering me could be the same as hers, so could I go and check whether I had developed thoracic endometriosis? Was my period pain finding new places to attack?

She referred me to her gynaecologist at Aga Khan University Hospital in Nairobi, who confirmed that I, indeed, had developed thoracic endometriosis.

Remember my explanation of endometriosis earlier? If it affects the reproductive organs, what was it doing all the way up my chest?

I looked around, and I realised that the simplest explanation was that the medical condition occurs when the lining of the uterus grows in other places, such as the fallopian tubes, ovaries or along the pelvis.

When that lining breaks down, like the regular lining in the uterus that produces the menstruation, it has nowhere to go, hence the extreme pain.

Thoracic endometriosis is the presence of the tissue in or around the lung.

Today, after years of suffering and hospital visits, I know what has been causing me the excruciating pain in my body.

I have had more than 10 surgeries since 2015, which are extremely painful, yet my lungs have still been collapsing every time I am on my period. Endometriosis, I have learnt, is mutative and keeps spreading.

We have been trying to manage it, but the recurrent lung collapses have been standing in the way.

The bad cells in my lungs need to be removed, but the cost of treatment is quite expensive and is not covered by many health insurance schemes because it is a pre-existing condition.

I don’t have a job now and am still recovering from the countless surgeries I’ve undergone in the last two months. My journey has, to say the least, been gruelling. The physical, mental and emotional pain has taken a toll on me and my family.