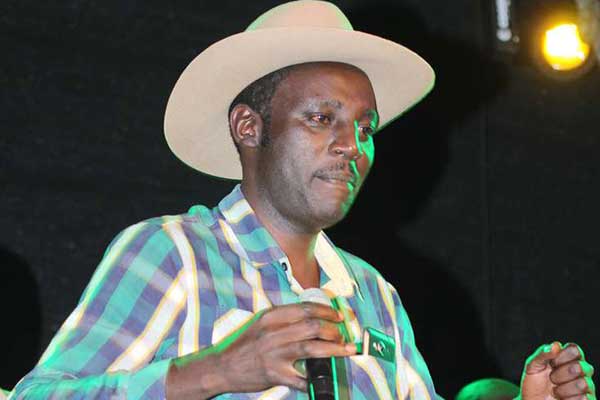 He was known as John DeMathew but his real was John Mwangi Ng’ang’a.

The popular Kikuyu musician was known for his use of satire to explain the political happenings in the country with messages targeting the people of Mt Kenya region.

Also known as Baba Shiku, the Benga maestro was also known for his love songs and also songs social life and Kenya’s politics, most of which were marred by controversy.

The artiste, who perished on August 18 near Blue Post Hotel along the Thika-Kenol Road as he left a fundraiser in Thika town, was known for his mastery of Kikuyu proverbs and sayings, earning himself the tittle of the Agikũyũ prophet and seer.

But his songs with political themes have sometimes brought controversy, landing him into trouble with State agencies for allegedly fuelling ethnic tension.

At the same time, DeMathew composed songs in support of President Uhuru Kenyatta and his quest for the presidency dating back to 2012.

At one time, DeMathew, together with other influential Kikuyu musicians including Muigai Wa Njoroge and Kamande Wa Kioi composed and released controversial songs praising the Mr Kenyatta, then deputy prime minister, while delivering scathing attacks on Mr Raila Odinga who was the prime minister in President Mwai Kibaki’s grand coalition administration.

The three were charged at the Milimani Law Courts in Nairobi with several counts of incitement to violence and hate speech.

DeMathew found himself in court after he released a video of his song Wituite Hiti on accusations of hate speech allegedly targeting Mr Odinga.

But he was acquitted in 2014 after the court declared that the prosecution “did not present enough evidence to link the singer to hate speech as alleged” and dropped all charges against him.

In 2007, DeMathew tried his hand in politics when he unsuccessfully vied for the Gatanga parliamentary seat. He emerged third in an election won by Mr Peter Kenneth.

After that, DeMathew changed tact and started composing songs with a view to influencing the political direction of residents of Mt Kenya region.

This year, he composed and released his arguably last political sing titled Twambe Tũrihe Thiiri(Let’s first pay the political debt) which revolves around political agreements between President Uhuru Kenyatta and his Deputy William Ruto and the handshake with Mr Odinga.

At the same time, DeMathew’s love life was also not devoid of controversy.

When he released a video of his song Njata Yakwa, there were rumours that he was in a relationship with Murang’a Woman Representative Sabina Chege, who was a radio presenter, with some people saying that the two were married.

But DeMathew refuted the claims, insisting that Ms Chege helped him take his music to the next level but guiding him on how best to use video illustrations in his songs.

“I have two wives, Caroline Waithira and Sarafina Mwangi. Ms Chege was not my wife but I owe her lots of gratitude for helping me make a name and attain class in the music industry, she showed me how to use video illustrations in my songs like the Njata Yakwa hit song in which she featured,” DeMathew said in 2017 during an interview with Kameme TV.

In his music career, DeMathew composed over 50 albums with most songs being popular hits.

He released his first song, Jenifer Reke Tũtũranie, in December 1986 and then his first hit My Dear Nduku in 1987.

DeMathew was the fourth born in a family of eight.

He went to Mukurwe Primary School before joining Igikiro Secondary.

After school, he went to Nairobi where he sold groceries before he established a butchery in Kariobangi.

He later relocated to Nakuru where he sold shoes.

It was while in Nakuru that DeMathew composed his first sing Jenifer Reke Tũtũranie with the help of musicians Sammy Muraya and Joseph Wamumbe.

Until his death, DeMathew was the chairman of the recently launched of Talents, Musicians and Composers Sacco which brings together all musicians from Mt Kenya region.