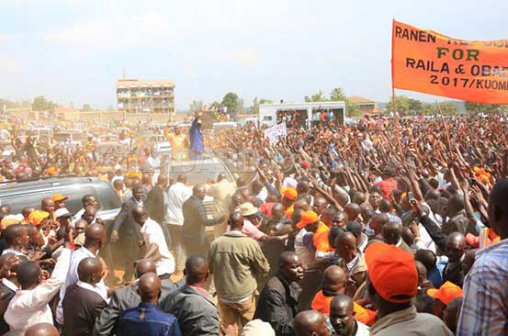 The Coalition for Reforms and Democracy (CORD) yesterday called for a rotational presidency during a political rally in Migori County that was dubbed as the home-coming of Suna East MP Junet Mohamed.

Cord politicians who spoke at the meeting said the rotational presidency would end the domination of Kikiyu and Kalenjin tribes in the presidency in Kenya.

“We implore Kenyans to vote for Raila in 2017 so that he can put an end to the current form of presidency and start a presidency that rotates among all tribes in the country,” said Kitutu Masaba MP Timothy Bosire.
Machakos Senator Johnstone Muthama added that he was being accused of perpetrating hate speech for calling for a rotational presidency.
Share
Facebook
Twitter
Telegram
WhatsApp
Linkedin
Previous articleFighting erupts in Juba: Kiir, Machar, Igga appeal for calm
Next articleFacebook tests secret message service